3 Years after the Earthquake in Haiti: How to Create Solutions that Last This wasn’t the picture that international aid organizations imagined three years ago.

From 2010 to 2012, the world pledged about $9.3 billion in humanitarian relief aid. However, millions of dollars never even reached Haiti’s shores.

“My sense is that a great deal of funding is not reaching the children,” said World of Children’s co-founder, Harry Leibowitz, who visited Haitian orphanages one year after the earthquake in Haiti. “There is not a great deal of oversight where many Americans have placed their trust.” The missing ingredient was a long-term plan. What happens when the food runs out, but local rice farmers have gone out of business? What happens after volunteers go home? Where do people go if their tent rips and their old home is still a pile of rubble?

Only a few people were asking these questions. 2003 Health Award Honoree Dr. Jeremiah Lowney has worked in Haiti for decades, and knew that long-term solutions were essential to the country’s survival. He began constructing hundreds of permanent homes, provided tools for displaced women to start their own businesses, and made sure that displaced children had a place to learn.

“Why is HHF having more success than other agencies in Port-au-Prince?” Dr. Lowney asked. “For years, instead of attacking the entire problem, and failing in despair, the Haitian Health Foundation has learned that by compartmentalizing problems into small packages and addressing the needs of one person at a time, the one person extends to a family, to a village, to entire communities.” 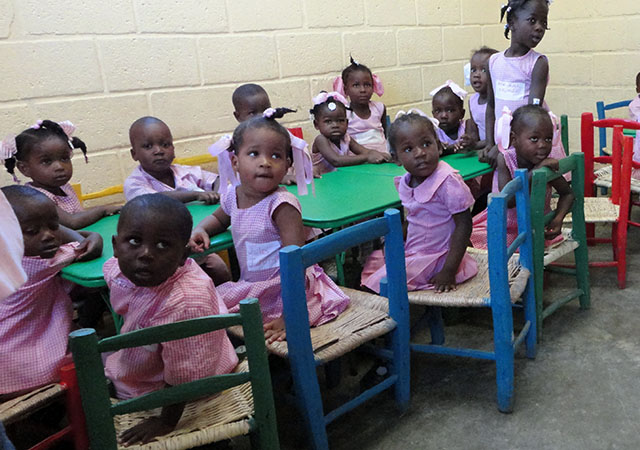 After the earthquake in Haiti, 2006 Health Award Honoree Dr. Jane Aronson knew that preparing the country’s next generation for success was the most important piece of the puzzle. Her holistic program for orphaned and disadvantaged children provides psychological support, enrichment and education. These children grow up with the support they need to build stronger communities in the future.

“Some people feel that NGO’s should back out of Haiti; cut their losses,” said Dr. Aronson in a recent blog on the Huffington Post. “I say that children should never to be part of that conversation. Children are always about potential and hope. They are not to be considered in any equation about ‘returns on investment.’ That’s why we keep making this trip.”

2006 Humanitarian Award Honoree Susan Krabacher has also made a distinctive difference in Port-au-Prince after the earthquake in Haiti. Her program’s site, Mercy & Sharing, is worlds away from the dangerous streets of the surrounding city. There, Haiti’s most vulnerable children thrive in a safe, clean environment, allowing them to successfully recover and learn. “The facilities at Mercy & Sharing Village at Williamson, in contrast to what I’d seen on the drive there, felt like an oasis,” wrote former Mercy & Sharing Board Member John Cripe on a recent visit to Haiti. “Once behind the tall security walls that border the property I immediately felt a striking difference between the squalor I’d seen and the order I now experienced. No mounds of garbage here—instead there were gardens. No gray piles of rubble or signs of destruction, but rather brightly colored buildings and the sounds of construction.”

It only takes a few individuals to make a difference in places like Haiti, where hope is hard to come by. Next time Haiti shows up in the headlines, be assured that people like our World of Children Honorees are there, on the ground, creating solutions for Haiti’s children.