Dr. Jane Aronson is one of those extraordinary individuals who isn’t intimidated by the seemingly insurmountable problems that face the world’s vulnerable children.

On the Ground
Dr. Jane Aronson – 2006 Humanitarian Honoree
Impact to date:
Over 35,000 orphans in 5countries 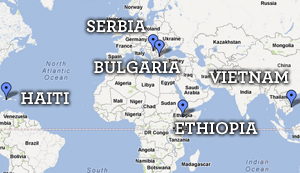 Mission:
To transform the lives of orphaned children and help them to become healthy, independent, productive members of their communities and the world.

Words of Wisdom:
“Do good work for children everywhere and teach your friends and family how satisfying it is. As I always say, if you want to be a happy person, go help a child.”

“By nature I’m an optimist,” said Dr. Aronson in an interview last year with The Washington Times. “I believe right now is a great moment because there’s an outcry.”

An internationally recognized pediatrician with a specialization in adoptive medicine, she has helped more than 10,000 children over the past 20 years and has become one of the most respected experts regarding policies and philosophies surrounding worldwide orphan care.

At the beginning of her career, Dr. Aronson worked with international orphans who were placed in homes in the United States. But though these children were able to find a happy home, she knew that millions of other orphans were not so lucky.

“It’s just an accident at birth that children are living a very, very sad life in one spot and a very lovely life in another,” said Dr. Aronson in a recent video interview with actor Andrew Garfield.

She saw that orphans who were not placed in a home and were still living in institutions needed more than just physical nourishment; these children desperately needed social and psychological care as well. Her determination to develop a more holistic approach to adequately care for orphans sparked the beginning of the Worldwide Orphans Foundation (WWO), whose mission is to transform children into independent and participating members of their communities. Orphan Rangers (known as the Peace Corps for orphanages) was one of the of the first programs Dr. Aronson and her organization developed. A year after Orphan Rangers was introduced, WWO set off on their first mission to Russia, where orphans face particularly difficult challenges like fetal alcohol syndrome and psychological issues. After successfully helping a number of children and gaining trust from local communities and national authorities, WWO programs began to rapidly blossom in other countries as well.

Dr. Aronson has since been recognized as one of the Top 10 Women of the Year by Glamour magazine and is the proud mother of two adopted sons. She now serves on World of Children’s International Advisory Council, which reviews final candidates for the annual World of Childrens.

“Do good work for children everywhere and teach your friends and family how satisfying it is,” Dr. Aronson said. “As I always say, if you want to be a happy person, go help a child.”