Reflecting on My Journey to Ukraine

The World of Children’s co-founders, Harry Leibowitz and Kay Isaacson-Leibowitz, recently visited a pediatric cardiac surgery program in Ukraine with celebrity ambassador Stephanie March. Our 2010 Honoree, Adi Roche of Chernobyl Children International, used her World of Children grant award to help fund this vital program and save the lives of children with congenital heart defects.

Here, Harry reflects on his trip as he watches a newborn patient’s heart surgery in progress:

A little heart, about the size of a nectarine, was beating rhythmically. It was fully exposed through the blood soaked sheets surrounding the tiny body of a baby, just 30 hours old. I stood transfixed — alongside the World of Children’s 2010 Health Award Honoree, Adi Roche of Chernobyl Children International, Celebrity Ambassador Stephanie March and my wife, Kay — in the dome above the pediatric cardiac program’s operating theater in Kharkiv, Ukraine, watching the skilled medical team work to save this tiny heart and the child it kept alive.

The team of surgeons, anesthesiologists and nurses were working carefully and steadily to close two fistulas and repair a valve that was not functioning. Without surgery, this newborn baby would surely die. Such are the ravages of “Chernobyl Heart”, a deadly cardiac abnormality that affects children whose parents were exposed to the radiation released during the Chernobyl disaster of April 1986.

Adi and Chernobyl Children International are helping children with “Chernobyl Heart”, having created a program that brings teams of medical specialists from around the world to facilities like the one in Kharkiv.

There, they partner with local specialists to conduct heart surgeries and, at the same time, train local specialists to continue the program on their own. Over the past five years, Chernobyl Children International’s program in Kharkiv has helped raise the capacity of the local team so that they can now do about 80% of the surgeries without support from visiting experts. In the next two years, training will be complete and the local team will handle all surgeries with their own surgeons and equipment. 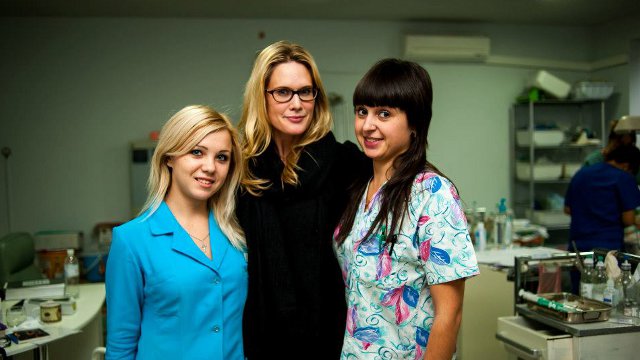 The World of Children helped to fund vital equipment like a heart-lung machine at the Kharkiv facility, without which these surgeries would not be possible. Since we awarded Adi two years ago, more than 250 surgeries have been done on children like this newborn.

When one considers the circumstances in which these surgeries are done — inside of an old, Soviet-era hospital with minimal support equipment and a somewhat primitive ICU for recovery — it is even more amazing to see firsthand what these people have achieved. They are truly heroes.

All of us at the World of Children should be proud of these results.