One Doctor Can Make All the Difference For 57 countries around the world, the shortage of health workers is quickly becoming a humanitarian crisis, according to a recent report by the WHO.

This shortage is having a direct impact on vulnerable children. Today, Nigeria has less than 1/6th the number of doctors per capita as the US, and the infant mortality rate is 23 times higher. In addition, children who live in areas that lack access to adequate healthcare are more likely to die from things pneumonia, influenza and malnutrition.

One key issue is that higher salaries and better working conditions are drawing skilled workers to wealthier countries, resulting in a brain drain of medical training and care. However, many of the heroes that the World of Children honor have rejected these lures for one simple reason: they refuse to abandon the children who need them. 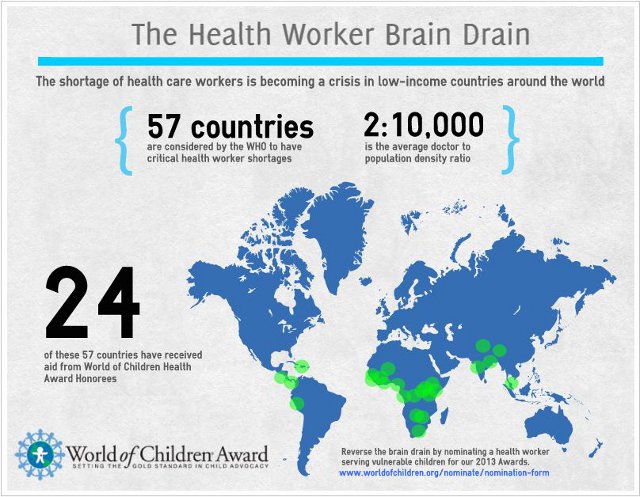 Combined, World of Children Health Award Honorees are providing health care for children living in 24 of the 57 countries with crisis-level health worker shortages, many sacrificing higher paying jobs and better working conditions. 2007 Honoree Dr. Ricardo Bennun, for example, passed up a prestigious position at Children’s Hospital Medical Center in Boston to treat children with birth defects in Argentina, while 2006 Honoree Dr. Jorge Rojas Zegers is using his training as a plastic surgeon to provide medical care for young burn victims throughout Central and South America.

Another hero is Dr. Ashok Banskota, who received the 2011 World of Children Health Award for establishing the Hospital and Rehabilitation Center for Disabled Children, a world-class center in Nepal that provides free treatment for children with debilitating deformities. After finishing medical school in New York, Dr. Banskota returned to Nepal, his home country, intending to apply his skills where they were most needed.

“When I returned to Nepal in the 70’s, I didn’t come back with a grand plan,” Dr. Banskota admitted. “The overwhelming need that I saw when I got back made my decision to stay and work in Nepal very easy.”

Over the span of 29 years, Dr. Banskota has provided free treatment to more than 43,000 children, many of whom would have been ostracized or even abandoned because of their deformities. He has used World of Children funding to treat 180 children for clubfoot, a common birth defect in the region. He has also been actively involved in training paramedical personnel who can deliver basic medical care to villages in Nepal.

“Lately in Nepal, there has been an increase in number of medical schools and the consequent number of graduates,” Dr. Banskota said. “I think there is a great need for not just training institutions but ‘quality’ education that can create leaders for the future.”

Though the numbers seem grim, hope for better global healthcare lies in people like our Health Honorees, who wake up every day to give the world’s most vulnerable children a chance at a healthy life.

“It has been a long and difficult struggle,” Dr. Banskota said, “but one that has been totally worth it.”

Help us discover and elevate people like our Health Award Honorees by nominating them for our 2013 Health Award. To begin the nomination process, visit worldofchildren.org/nominate/nomination-form.